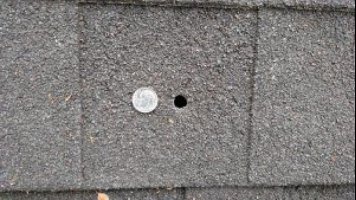 The Fourth of July is upon us and many will be out celebrating.  As I see everyone planning their 4th of July celebrations I often stop and think about the number of bullets and bullet holes I find in roof surfaces in the Houston area due to falling bullets.  Finding bullets is fairly common and seems to be most common inside the 610 Loop, probably due to the dense population inside the loop. It is more than a little alarming to find common evidence of falling bullets, and it does give me pause when going outside near midnight on New Years and during the 4th of July.

I most often find bullets partially lodged in a composition shingle roof system, but I occasionally find them fully penetrating the roof.  I have also seen evidence of this type of damage in TPO/Vinyl roof systems, metal roofs, and modified bitumen roof systems.  The hole in the featured image at the top of this article fully penetrated the roof system, and the hole was through the roofing membrane and the deck.  Most research I have read indicates that bullets fired vertically tend not to have sufficient energy for this type of full penetration, but bullets fired at an angle into the air may have much more speed and energy on impact allowing this type of damage to occur.  Past tests by others have indicated it is almost impossible to shoot perfectly vertical indicating that significant damage upon impact is more likely.  Bullets I find well embedded in the roof systems convince me that these falling bullets could result in serious injury if they hit a person.  As you would imagine any roof punctured by a bullet will require repair to prevent water entry.

When I first starting doing inspection and consulting work the common belief was that these bullets could do little harm.  That belief has changed over the years as several individuals in just the Houston area have been seriously injured by falling bullets.  Another concern is the act of irresponsibly handling and discharging a firearm during festivities of a New Year’s celebration.  Discharging a firearm is illegal inside most cities.  The City of Houston Police have announced they will be cracking down on midnight gunfire, and if caught you will spend the night in jail.

Of positive interest is that I am not finding lodged bullets as often as I did 5 or 10 years ago but I do still find them.  This may mean that fewer people feel the need to fire into the air.  Keep in mind that as a firearm owner, and as a handler of a firearm, you are responsible for a bullet from the time it leaves the muzzle until it comes to rest.  You may also want to be cautious about taking a midnight stroll on New Year’s or during other holidays when people have traditionally fired guns into the air.  Be safe out there.