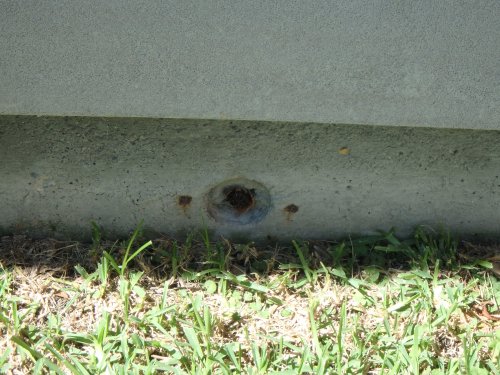 You are having your home inspected and your inspector points out that the cable ends are exposed at your foundation, and you wonder exactly what this means and, “What is a Tendon Anyway?”  In short it means that the cable ends of the tendons or cables that reinforce your foundation are at risk of eventual corrosion failure or possibly have failed.  When tendons fail there is an increased potential for large cracks to form in the foundation concrete. 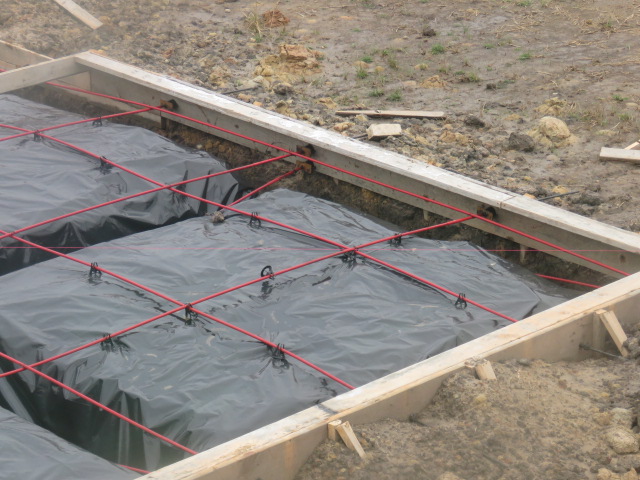 Tendons installed in preparation for placement of concrete. 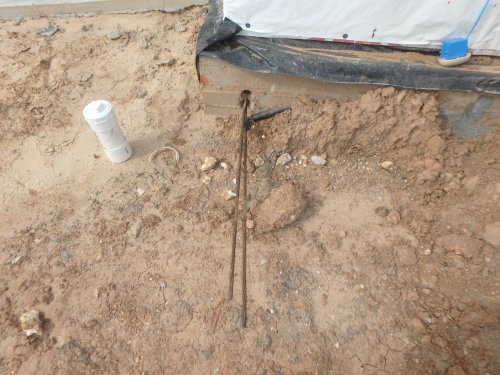 What is a Tendon?

Let’s take a look at basically what a tendon is and why it is important.  In post-tension reinforced slab on grade foundation the concrete of the foundation is reinforced to prevent cracking and hold the concrete together when it bends by the installation of tendons that compress the concrete.  The tendons are the assemblies made up of a cable extending across the foundation, sheathing filled with grease covering the cable, and an anchor at either end of each tendon cable,  The tendon assemblies are installed in a grid arrangement inside the foundation forms with the purpose of compressing the concrete in two directions when a tension load is applied to the cables after the concrete has hardened.  Tension is applied to each cable by using a hydraulic tool that pulls on the cable of the tendon stretching the steel cable.  The anchors at either end of the tendon secures the cable tension and transfers the tension load to the concrete.  Since the concrete is now in compression in two directions it will resist cracks when it bends.  Bending can occur due to loading by the weight of the structure, items placed in the building, or due to changes in the volume of expansive soil, common in our area, supporting the foundation as the seasons change and the soil dries out or becomes wet.  To be clear the tendon is defined as the set of components typically including a steel cable housed in a plastic protective sheathing filled with grease, two cast anchor points at the ends of the cable.  This is the basic theory behind this type of concrete reinforcement. 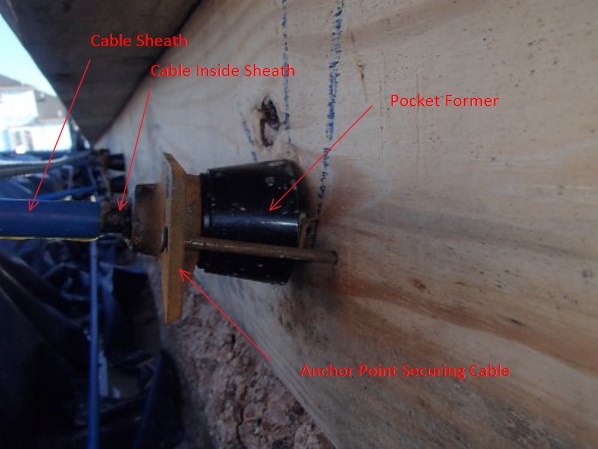 Parts of a Tendon Before Concrete is Placed 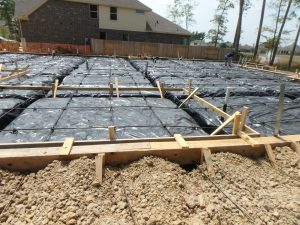 For most home owners post-tension reinforcing tendons are one of those structural construction elements that are “out of sight and out of mind” and they are blissfully unaware they are there doing their job.  Often home owners only become aware of their existence when a diligent home inspector or engineer points out they have become exposed either due to poor workmanship in construction, damage, or failure.  Most often they require maintenance when they are not well protected at the time of construction to prevent the ends from being exposed, leaving the critical anchor point of the tendon at risk of receiving water.  Exposure can result in corrosion of the cable, anchor, or locking wedges and eventually cause the cable to lose its tension and leave the foundation concrete with insufficient compression to resist cracking. 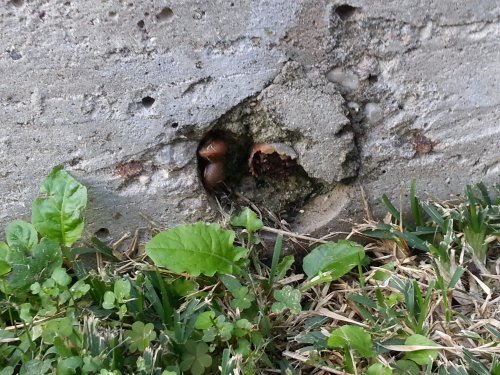 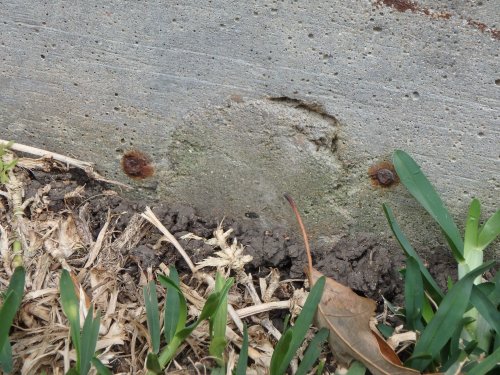 Failure of a Tendon

Failure of a tendon is not always visible, but when it is it can be dramatic. Visible indications of tendon failure can be indicated by the cable of the tendon extending out of the foundation or in some cases may push the surface off the interior floors as the tendon cable buckles damage interior floors.  This occurs because the cable actually stretches (strains) like a rubber band during tensioning and in service, and when the cable fails this stretch, stored energy is released.  If the release occurs at one end or the other it is much like flicking a rubber band across a room and results in the cable extending out the side of the foundation. 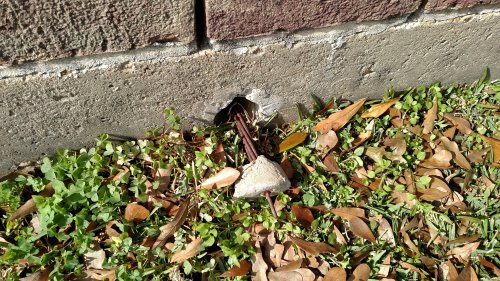 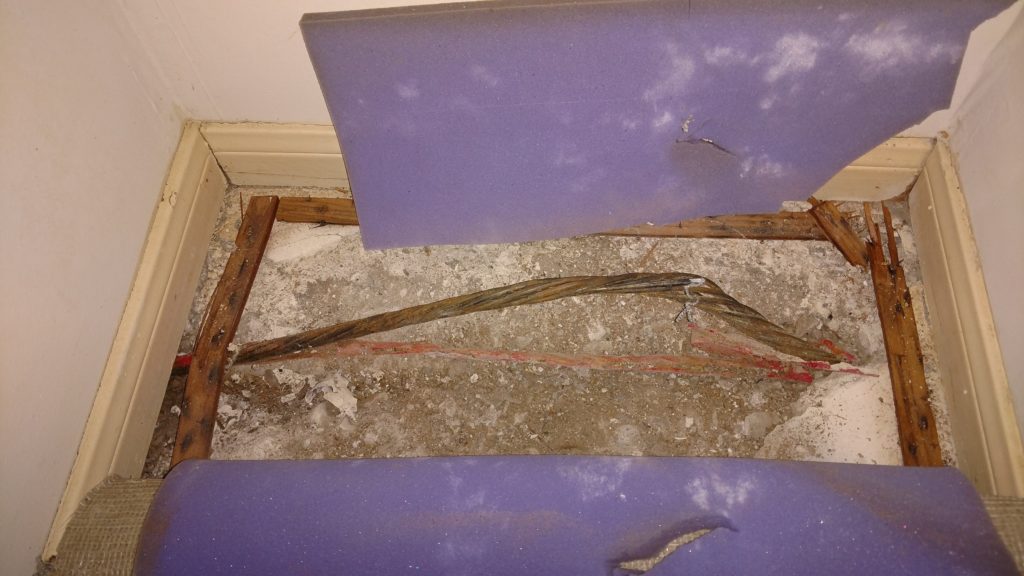 If cable ends are found to be exposed a repair contractor familiar with the inspection and repair of tendons should be consulted.  It is best to hire a company that installs and repairs tendons in the event you find one or more tendons in need of testing or repair rather than just grouting the exposed ends. The repair contractor should be familiar with the correct detail and materials for proper repair and grouting at the tendon anchors so that the condition causing exposure of the tendon ends does not reoccur. 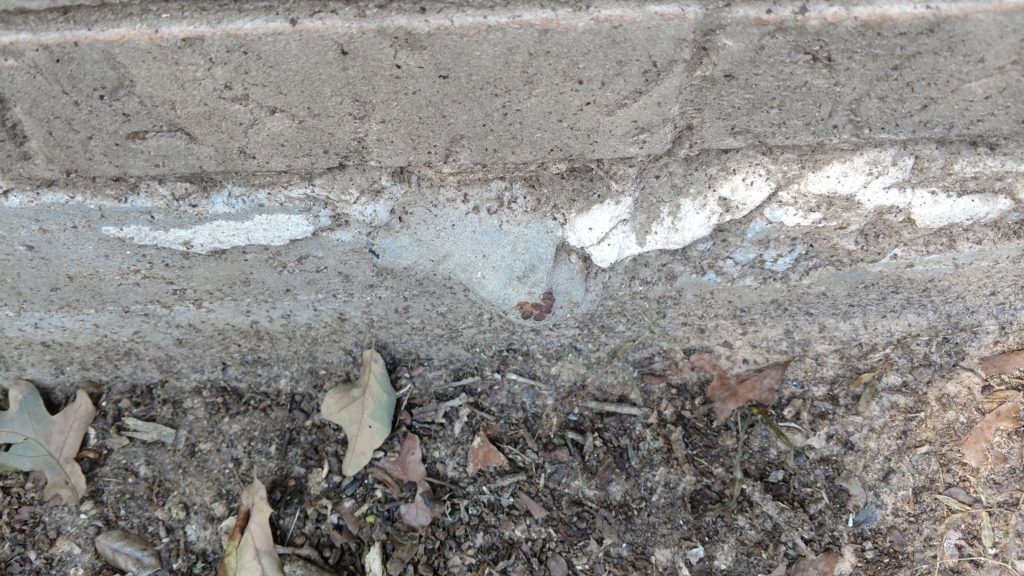 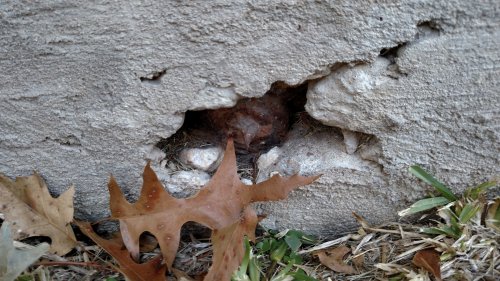