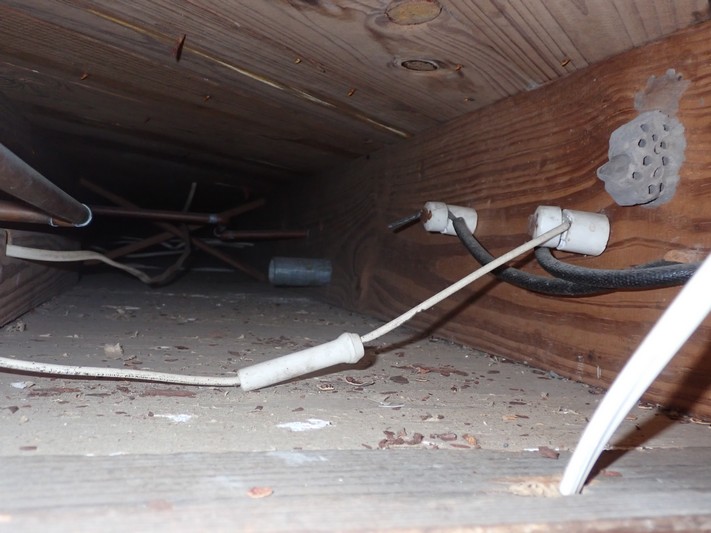 During inspection of older homes in the Houston area it is not uncommon to find Knob and Tube (K&T) wiring.  In Houston this type of wiring is typically found in buildings constructed in the 1940s and before.  Knob and tube wiring was an early standardization of electrical wiring consisting of two conductors, a hot and neutral, which is run over framing attached to ceramic knobs and through framing using ceramic tubes to protect the wire and framing.  Unlike modern wiring there was no grounding conductor, which provides a safe path to ground in the event of a ground fault, rather than your body.  The wiring was also light gauge and can overload more easily with modern appliances and is often in a deteriorated condition due to age.

In most of the residential construction in our area the wiring is installed in concealed spaces inside the walls, above ceilings, between floors, and under floor at the crawlspace.  In very old buildings it was sometimes exposed at surface mount switches and some fixtures but this is not common.  At this age those fixtures would likely be worn out and non-functional.  Although commonly observed, the National Electric Code (NEC) prohibits K&T wire from being buried in insulation at walls, floors, or attics as this prevents the light gauge wire from cooling properly and creates a fire hazard.

The wiring is comprised of tin covered copper, coated with a rubber insulation, protected with a cloth covering embedded into the rubber.  The wiring is often slightly lighter in gauge than a #14 copper conductor and thus should not be used for circuits exceeding 15 amps. This wiring is currently considered functionally obsolete.  The NEC specifies that wiring can only be installed in the K&T manner if you are tying into an existing system, but only under the approval of your local code official, which is not likely.  Most insurance providers will decline to insure buildings where K&T wiring is known to exist due to the potential fire hazard associated with this old wiring, which is often in poor condition.

K&T wiring is becoming less common as buildings are remodeled and replaced in the Houston area, but we do still find it in concealed places.  If your building was constructed in the 1940s or before there is no guarantee you don’t have it somewhere in the building and you should have a thorough inspection.  The wiring is considered a hazard due to its relatively light gauge deterioration associated with age.  Often the insulation will fail at junction boxes or connection points due to manipulation of the wire because the insulation has become old and brittle.  The wire also becomes brittle at junction boxes and connections due to work hardening caused by maintenance or modifications to the electrical system making whole circuits prone to failure with normal loads.  Where this type of wiring is known to exist it is recommended that it be discontinued and replaced with modern circuit components that meet the current NEC requirements.